I have over six years of experience mapping and conducting analysis with a variety of GIS tools and software. In this portfolio I present a selection of my projects. Note: this portfolio does not include two major GIS projects currently under peer review.

In the fall of 2016 and 2017 I taught GEOB 270: Introduction to Geographic Information Science at the University of British Columbia. I drew on past versions of the course, but included additional content on critical GIS. The course website is here.

This is an example ArcGIS Online map generated through the Esri Training course “Getting Started with ArcGIS Pro.” WordPress.com doesn’t allow embedding, so I’ve provided a link. 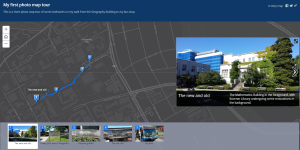 This is the example Story Map photograph tour provided in one of my labs.

In the summer of 2016 I taught “Introduction to Geographic Information Systems (GIS) for Environmental Impact Assessment” as part of the Vancouver Summer Program at UBC. The program is an intensive 4-week academic exchange for international students, many of whom came to the program from China. I developed specific content for that course that would introduce students to GIS at a fast but manageable pace. One lab I developed used ESRI Story Maps and had students create a tour of the UBC campus using smartphone GPS data and photographs they collected themselves. You can download the lab here.

In this collaborative project with Emily Rosenman, we examined Cleveland, Ohio’s use of demolition as a policy response to the foreclosure crisis and long-term housing abandonment. This map illustrates the overlap between high-foreclosure and high-demolition neighborhoods. You can read more about this project here and see the peer-reviewed paper we published based on this research here.

Together with Lisa Ohberg and Nafisa Kassam I produced a “Good Food Map” and directory for the Canadian Association of Food Studies 2014 meeting. Our map was included in the program to help attendees find local, organic, and other specialty food businesses. The full map and directory can be downloaded here.

One component of my M.A. thesis in Geography at the University of British Columbia involved using new methods for measuring and understanding food access beyond the “food desert” model. I used a new dataset of businesses and urban agriculture locations based on SimpleGeo database and original research and ran a cluster analysis that included both demographic variables and food access variables. The results of my food access analysis are shown in these two maps. Overall, I found that Vancouver, despite being known for its densification efforts, actually has many neighborhoods with “residential deserts” of food access comprised mostly of suburban-style single-family homes.  While Detroit in some ways lived up to its image as a town with poor food access, my data also showed the ubiquity of convenience (or “party”) story food access and pockets of diverse and plentiful food access, especially when urban agriculture was accounted for. You can read more from my thesis here. 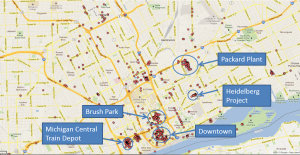 This is a screenshot of a dataset created by querying the Flickr API to download a collection of user photographs of abandoned spaces in Detroit, Michigan.

I completed a small project to create a map of places where Flickr users took pictures of abandoned buildings in Detroit. I used the IM2GPS code to create a Google Fusion Tables map that displayed the results. The Fusion Table was deprecated in a Google Drive update, but the results are shown in a screenshot above.

This is a screenshot of an embeddable web map showing live data from USGS earthquake activity dataset.

As a Teaching Assistant for GEOG 472: Advanced Cartography at the University of British Columbia, I worked with Dawn Mooney and Adam McConchie to develop a lab where students had to create an interactive web map using the Mapbox platform and Tilemill software. This lab taught basic HTML and CSS skills and introduced students to one ecosystem for producing and hosting web maps. The image above is a screenshot of the interactive map produced in the lab, which displayed recent earthquakes using to indicate magnitude. You can see the interactive version here. If I taught the lab again, I could update it to use ArcGIS Online or MapBox’s new product, MapBox Studio.

A screenshot of a Google Map showing the results of Henry’s Fork Foundation summer intern activities.

While a summer intern at the Henry’s Fork Foundation in eastern Idaho, I started an interns’ blog and created an interactive Google Map of our summer field surveys. This blog and map allowed the Foundation to communicate the results of their fishery and river conservation activities to their donors and the local community. Some of the features linked to Picasa have deprecated, but you can see a screenshot above or check out the KML file here.

This map shows areas of Baltimore, Maryland, vulnerable to a category 4 storm surge and the school evacuation routes in event of such an emergency, 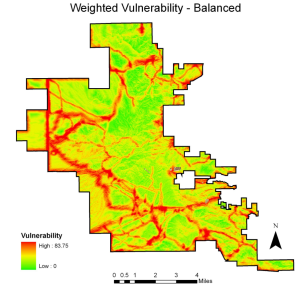 This map shows the results of a socio-environmental vulnerability analysis for invasion by buffelgrass in the Sonoran Desert of Tucson, Arizona.

For my final project in Colgate University‘s GEOG 245: Geographic Information Systems course I combined data on infrastructure (roads, trails, and attractions) and physical geography (slope,  aspect, and washes) to model the socio-environmental risk of invasion by buffelgrass (Pennisetum ciliare) in the Sonoran Desert of Tucson, Arizona. This project specifically examines the Tucson Mountain Park and the Saguaro National Park West. I also used GPS data of verified buffelgrass removal areas to test my map, finding that aspect alone was a better predictor of invasion. You can read the whole poster project here. I studied buffelgrass more in a research project with Dr. Jacob Brenner, which formed the basis for my undergraduate honors thesis.